Theocharis Grigoriadis is Assistant Professor of Economics at the Osteuropa-Institut of Freie Universität Berlin. He has just published a book entitled Religion & Comparative Development: The Genesis of Democracy & Dictatorship with Edward Elgar Publishing and its Series “New Thinking in Political Economy”, Cheltenham, Gloucestershire & Northampton, Massachusetts, 2018. 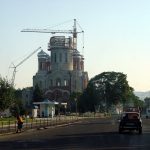 The Breakup of Rus’: Ukrainian Orthodoxy Between Constantinople and Moscow

The emergence of an independent Orthodox Church in Ukraine is likely to create a permanent breakup in the Orthodox world between the Moscow Patriarchate, whose identity lies in the spiritual unity of Russia, Ukraine and Belarus, and the Ecumenical Patriarchate of Constantinople, whose mandate is the coordination and resolution of conflicts within and across Orthodox churches. Theocharis Grigoriadis proposes two models which may offer grounds for the rise of an independent Ukrainian Church without instigating a new Cold War between the Western and Eastern visions of global Orthodoxy.

Error: (#10) This endpoint requires the 'manage_pages' or 'pages_read_engagement' permission or the 'Page Public Content Access' feature. Refer to https://developers.facebook.com/docs/apps/review/login-permissions#manage-pages and https://developers.facebook.com/docs/apps/review/feature#reference-PAGES_ACCESS for details.
Type: OAuthException
Code: 10
Please refer to our Error Message Reference.